Pause...It Makes All the Difference

While I have a passion for leadership development (having spent the majority of my 60 years in the business), I’d like to offer something that transcends leadership and applies equally to all humans.

Think of the last time someone provided feedback on something you did. What was your initial reaction? Was it something like, “Well, that’s just Mary; she WOULD say that. She doesn’t know…”

Or, did you ever get feedback from your spouse or significant other? What was your initial knee-jerk response?

If you’re like me, your immediate reaction is to discount — mentally reducing the possibility that the person’s feedback or suggestion could be valid or useful. And discounting is perhaps the greatest enemy of learning, growth, innovation, empowerment, relationships, and — I would argue — happiness.

Discounting happens all the time. When you and a friend discuss whether a particular political tactic will have any positive impact, you tend to discount the other’s opposing views without consideration or hesitation. When your spouse tells you that you left pickle juice on the counter...again, you discount her statement as nagging. (Speaking from recent personal experience on that one.)

I suggest that there’s little we can do to change that initial reaction. However, I DO believe that it’s the split second after that initial reaction that makes all the difference. We need to FIRST recognize that initial reaction for what it is — some reptilian auto-response perhaps — and THEN pause and reexamine the other person’s statement with a more measured reflection. Everything changes. You move the conversation from the teal bubble to the purple bubble: 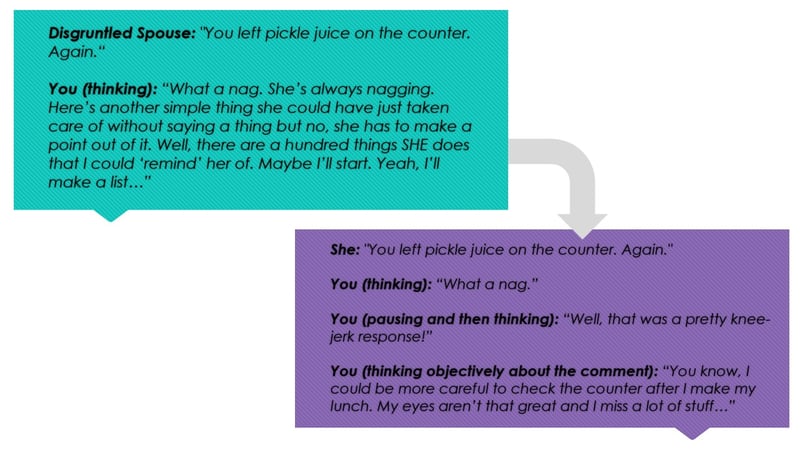 And please, I’m NOT trying to turn you into a self-flagellating martyr. No, what I AM saying is that by discounting — by giving in to that initial primal reaction — we often move down a path that is not productive. In fact, that knee-jerk path can be just dead wrong.

By catching yourself discounting, you can pause and say to yourself:

You gain a LOT by catching yourself discounting, pausing, and reconsidering:

The next time someone offers an opinion or suggestion different than your own, recognize that initial reptilian brain response of discounting for what it is; then pause and reconsider the opinion in a more objective, measured response. You’ll be a better leader. More importantly, you’ll be a better human.